“These people gave me something to live for”

When Raymond Maule was diagnosed with pulmonary hypertension, he found support in an unexpected place. Here, he tells Emphasis how his local women’s rugby team have helped him accept his condition and live a full and happy life.

When Raymond Maule was diagnosed with pulmonary hypertension, he found support in an unexpected place. Here, he explains how his local women’s rugby team have helped him accept his condition and live a full and happy life.

“I was born with Eisenmenger’s Syndrome, and a few years ago was diagnosed with having PH. The last few years have been some of the most difficult of my life.

The family moved from Bradford to Leeds where I came under the care of the heart and PH unit at the Leeds General Infirmary (LGI).

Life was becoming difficult to handle. I had coped all my life with having Eisenmenger’s, but when I was informed that I had PH, life took a dramatic downturn. Knowing that this was a serious illness with no cure, I become despondent, and without hope. 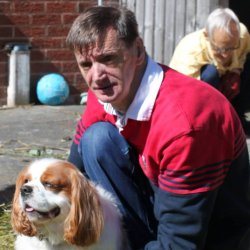 I fought back, and loving the game of rugby league, I found a local club where I could go and watch the games.

That club was West Leeds ARLFC, and at that time only the women’s open age team were playing the winter game.

This was last December, and I managed to see two games before they had a break until February, when I began watching the games on a regular basis. I am an avid writer and photographer, and I took my camera along and took photos of the games.

I was able to share these photos on the clubs’ Facebook site and over time, I was ‘adopted’ by the team. Since then I have never looked back.  When the women’s side finished for the season, the younger end began their seasons, and I have since been adopted into those age groups and teams. They have all embraced me as a person, and learned about my illness, the restrictions this causes, and much more. These people gave me something to live for and I now look forward to the games and events at the club.

All the teams look upon me as the club’s photographer, although my main team is the women’s and girls’ team. Last season the women won the Women’s Rugby League Association First Division Championship, and in June they celebrated their achievement with a presentation and awards evening. I was invited along to take photos and received a huge surprise when I was named the ‘Club Person of the Year’ and received a lovely trophy.

Having learned of my illness over those months, the girls also made the occasion special by holding a raffle and collection for the PHA UK –  another surprise.

More than just a rugby club, these are very special people and have embraced me as a person despite my illness. They have helped me through some of the darkest times of my life, providing hope, and a feeling of being wanted and loved.”