My life with Murray

The decision to get a puppy a few months after being diagnosed with PH didn’t just make Sally McHugh happy – it completely turned her world around. Here, she explains how a small cockapoo named after her favourite tennis player has made such a difference to her life.

The period leading up to Murray was difficult. I first saw a consultant about my symptoms back in 2016 and ironically was told that it was ’very unlikely’ to be a problem with my heart. A year later pulmonary hypertension was confirmed, and it sent both my husband Bernie and I into a tailspin.”

I spent most of the first part of 2018 feeling very sorry for myself.I was really quite depressed, and felt like my future and the retirement I had been planning for had been taken away.  I sat and watched box sets all day, and I was overwhelmed by feelings of how unfair everything was. 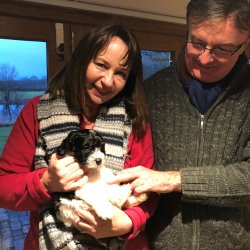 He has enhanced everything in so many ways

A low spot for me was in early February. Bernie and I had tickets for an Elbow concert and we had to park miles away from the venue. It was a horrid rainy night and I really struggled walking from the car park. I sobbed all the way through the concert as it made me realise just how ill I actually was.

Everything changed when my daughter’s friend rang me to say her dog had given birth on Christmas Day.  I’d met a cockapoo before and thought they were fantastic, and being hypoallergenic they don’t shed fur, which is great for someone with my condition. The timing was ideal and I persuaded Bernie that it would be a good idea.

I truly believe in good things coming together at once. I’d started my medication in the December of 2017 and was finally starting to feel better, and now Bernie had said yes to a dog.

This tiny thing came into our house and took over our lives. He has enhanced everything in so many ways.

I immediately had to stop feeling sorry for myself because I had this little dog that relied on me. I had to get up, get him out in the garden, and his needs came first. It was like a switch went on. It coincided with my medication being changed, and both things just came together.

A month after getting Murray I had an appointment at my specialist centre and I was like a different woman. I couldn’t wait to tell everyone how much better I felt.

He makes sure I get out and exercise, whatever the weather, and it energises me. It feels like a pleasure rather than a chore. I do two walks a day now round where we live in Sutton Coldfield, and I feel lucky to have so many lovely routes to choose from.

The joy and healing power of the outdoors has really affected my mind, and I never would have realised that without Murray. He’s optimistic, buoyant, and everyone’s his friend. And that’s the other thing – he’s helped me meet so many people as there are always other dog walkers to stop and chat to. Bernie works, so without Murray I’d be on my own all day.

I’m so much more sociable since getting Murray.I ring friends to see if they want to come walking with us, and it’s helped me get to know the neighbours more. He’s brought a lot of joy to people on our cul-de-sac too! Getting him has been so expansive and opened up my world.

We now plan our holidays around Murray, and we’ve been to beaches in Northumberland and Wales, where we’ve done lots of walking. I’m not saying I’m fixed – I couldn’t climb a mountain – but as long as I’m sensible about where we go, it’s great. We can walk for miles, and I never would have believed that last winter.

We’re now making plans for when Bernie retires, and our latest dream is to get a big motorhome to drive round Europe, obviously with Murray. We used to think we would fly around the world, but my illness has changed that. I don’t mind now though.

I refer to last winter as ‘the dark days’. Now I feel like I’m in lighter days. I’ve really come out of the darkness and I’m sitting in the light again. I’m full of optimism, thanks to my specialist centre of course, but also thanks to Murray. I’m in a much better place.”

I feel much more grateful for the small things in life.I walked Murray up the hill near our house recently and witnessed one of the most amazing sunsets I’ve ever seen – it was like the sky was on fire. And I wouldn’t have experienced that without Murray.