Pauline Harrison from Inverness was diagnosed with PH when she was pregnant with her little boy. She’s now learning to make the most of life with her son.

I knew there was something wrong right from the beginning. I fell pregnant and was tired and drained, my skin was grey, and I was getting increasingly breathless. As the baby grew it got to the stage where I couldn’t walk up the stairs, dress or shower. I couldn’t walk more than the length of two cars before having to stop for breath and I was getting dizzy spells too.

Each time I went to see a doctor about it they told me it was a normal part of pregnancy. It was my first child so it felt hard to stand up for myself, having had nothing to compare it to. I knew something was really wrong but no-one would believe me.

I saw two or three different GPs and two consultants. One consultant told me it was part of being pregnant and I should just ‘get on with it’.

When I was around seven months pregnant my symptoms had got so bad that I had to move into my mum’s bungalow because I could no longer manage the stairs in my house. I was getting blue lips and feeling dizzier, so I went to the doctors one more time, and saw someone I hadn’t seen before.

He could tell something was wrong and asked if I had ever had my oxygen levels checked – so referred me to the hospital. When there, I struggled to walk to the lift and a consultant saw me, thought I was in labour, so insisted I was seen straight away.

I stayed in for two days and had my oxygen levels checked and a chest x ray. They showed there was something wrong with my heart and I was referred straight away to the Scottish Pulmonary Vascular Unit at the Golden Jubilee Hospital in Glasgow for further tests and that’s when things started to move.

I had a right heart catheter the next day and at seven months pregnant, I was given the news that I had pulmonary hypertension.

I had never heard of it and I couldn’t get my head around it. All I kept thinking was ‘I’m dying’. I was told there was no cure, but that it could be managed with drugs. 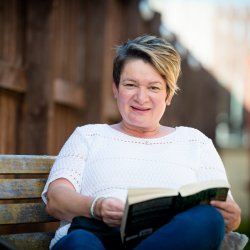 I’m positive that one day there might be a cure for PH.

I was so scared. I didn’t know how long I had left. I was bringing a child into the world, that I wanted so much, and I didn’t want to leave my baby behind. I cried 24/7. I felt angry. I had always looked after myself, so why this?

A week after I was diagnosed, my son Ciaran was delivered early by caesarean section. It wasn’t easy and I owe my life to the staff at the Golden Jubilee Hospital. I just can’t thank them enough.

Fighting for what I deserve

I was working as a nursing auxiliary on a renal ward when I was diagnosed, but I had to give that up. My employers tried to help me find something less demanding, but no job in a hospital is easy!

I tried some office shifts but my partner is in the forces and was based down in England, so with a young baby and the fatigue associated with the PH it just didn’t work.

When I was diagnosed I was awarded benefits for the next five years. But problems began when I had to apply for Personal Independence Payments (PIP).

I had my car taken off me but I fought it in court and won. Then it happened again four months later and I had to fight it all over again. Again, I took it to court and won.

When they took my car off me I thought my life was over. I couldn’t walk very far and the thought of having to get a young child on and off a bus, with my symptoms, was awful. It felt like my whole world shattered. They had taken my lifeline.

I spent years fighting for PIP. I’ve now got what I’m entitled to and don’t have to be reassessed until 2021, but it makes me so angry that other people are still having to fight for what they deserve.

I feel like I’m accepting things. I still have good and bad days but I’m feeling a lot better as I’m learning more about the condition and I don’t feel like I’m going through a dark tunnel on my own anymore.

I do still have a fear of ‘oh my god, I can’t leave my son behind’. But I’m positive that one day there might be a cure for PH.

I had a Hickman line put in, delivering medication straight to my heart, and I feel like it’s given me some of my life back. I have the motivation to do things now, and can manage everyday tasks like hoovering much better. Before, I used to struggle to get even two rooms done.

I feel more like the old me now. Sometimes I even forget there is something wrong with me – until my body reminds me!