At 73, Jenny Blakeman doesn’t let her age or her pulmonary hypertension get in the way of living her life.

Large personalised lorries are a common sight around Jenny and Graham Blakeman’s house.

While some people in their seventies put their feet up, Graham restores old trucks, takes them to shows around the country, and runs a haulage repair business on the side.

And despite being on oxygen 24 hours a day, Jenny still plays an active role in the business by looking after the books from her office on the second floor of their home, which she reaches via a stairlift.

She also provides a vital service to her son by looking after his dog, a rescued crossbreed named Jessie, every day while he is at work. And paining watercolours, a hobby she took up in her sixties, is another way that Jenny keeps her life full.

“I keep positive because you’ve got to when you’ve got pulmonary hypertension.You can’t give in to it, so you’ve got to keep going and do the things that you normally do – or at least try to. If you didn’t stay positive, you’d just get old and go into decline. You’ve got to live your life.”

Jenny was diagnosed with PH in 2016 after visiting her GP when she noticed she was breathless and had swelling in her lower legs. A scan revealed the right side of her heart was enlarged, and whilst waiting to be seen at a specialist centre she collapsed at home.

After six weeks at her local hospital, she was finally allowed home but has been on oxygen 24 hours a day ever since. Jenny admits that this is what she finds most challenging about life with pulmonary hypertension.

“It’s something I just have to live with but I do find having the oxygen all the time is difficult. I have to be careful not to fall over all the tubes. I’m used to the constant humming of the machine now but it used to keep me awake at night. 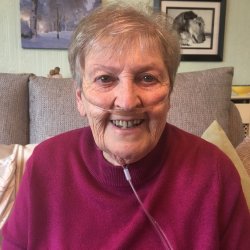 If you didn’t stay positive, you’d just get old and go into decline. You’ve got to live your life.

“I use a portable oxygen machine when I go out and about. I can’t walk far when I leave the house so I’ve got a buggy which I use if I need to. I get more panicky being on the oxygen, as I have to double think about everything. It makes me a bit more wary about going out.

Jenny still drives, but only when Graham is in the car with her. She has also had to adapt to looking different with her oxygen on, but has found things have got easier with time.

“When I go out, people look at me because I have the oxygen on, especially children. I felt self-conscious at first but I got over it. You have to, otherwise you’d never go out, and it’s important that you do.”

Painting and looking after Jessie are two ways in which Jenny relaxes during the day, and both help to take her mind off her illness.


“Since having pulmonary hypertension I tend to get a bit agitated over silly things which I didn’t before, and painting the watercolours helps me relax and get back to normal. I like to paint sceneries mostly, sometimes freehand and sometimes from photographs.

“My son drops Jessie off every morning and she is good company for me while Graham is out. I can’t walk her anymore, but she’s a good friend and she looks after me during the day.”

Although Jenny can no longer tend to the garden or do vigorous housework, it’s still important to her that she maintains a routine and keeps positive.

“Every day I try to do the things I used to do. I get up, I shower, I make up the beds before I come down. I tidy round, I wash up, I get the dinners. Sometimes I have my off days but the majority of the time I try to be bright, cheerful and funny. For my own good, I find I’ve got to keep going. “