For Tamsin Hutchings there is nothing more enjoyable than picking up a pencil or a paintbrush and letting her creativity flow. She told us how her talent for art helps her to cope with living with pulmonary hypertension and other health conditions.

Tamsin, 28, has produced an impressive collection of over a hundred pieces since she took up the hobby.

She posts images of her art on the photo-sharing website Instagram and other online platforms and gets great feedback.

Tamsin first began to show symptoms of PH when she was aged around three when she repeatedly caught colds and suffered from a phlegmy chest. The condition began to make her more breathless around the time she started at senior school, leading to her diagnosis. Up until recently she was treated only with aspirin, but she is now prescribed Sildenafil.

Tamsin explained: “It was diagnosed quickly. I didn’t have oxygen until I was 24. I only just started on medication.

“I went to mainstream schools. I left plenty of time to get there, to allow for breaks when I needed to catch my breath. My secondary school was very understanding and gave me a pass to use the lifts, and time to get to lessons.”

Also in her early teens, Tamsin developed scoliosis, a condition where the spine twists and curves to the side. In addition, she has Eisenmenger’s Syndrome, which affects adults born with congenital heart disease.

Despite her challenges, Tamsin achieved 98 per cent attendance at school and was one of the top pupils in her year.

Tamsin’s interest in art was sparked by a childhood visit to a museum when she was captivated by artefacts from Ancient Egypt. She went on to paint craft sets featuring plaster busts of Egyptian art. Later she began to experiment with drawing Chinese dragons, again inspired by items she had seen during visits to the museum.

As yet Tamsin hasn’t sold any paintings or drawings but says she would only consider selling commissioned pieces as she admits she ‘gets emotionally tied with the art’. Instead she likes to give her artworks to relatives and friends as gifts.

Tamsin works from both photographic references and from life and it can take her anything from a week to six months to complete a piece depending on the size, level of detail and the medium. She uses pencil, colour pencil, acrylic, watercolours, ink and pastels. Over the past few years, she has begun to paint with oils. 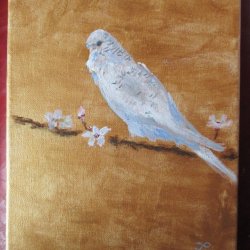 My art has become more realistic, but the backgrounds have become simpler.

“I have branched into different subjects, over the years. Whenever I have an art block, my art tends to change,” she commented.

At the moment Tamsin is focused on drawing and painting birds. This includes portraits of her own colourful pets – a baby canary called Hikariand and two budgies called Sky and Bertie. Tamsin had a third young budgie called Natsu but she sadly died a year ago.

Tamsin said: “Sky is white, and pale blue. He’s a shy little budgie who loves his music. Hikari loves playing with tassels, and his baths. He looks like a fluffy pom-pom when he has fluffed himself up. Bertie, who is green and yellow, has a trill that sounds like a crystal bell. He even trills when he sleeps. “I always love drawing and painting them, as it always cheers me up and they are little characters.”

Tamsin also creates portraits of actors and characters from theatre. She is a fan of award-winning Broadway and West End actor and singer John Owen-Jones and has presented the stage star with some of her work.

Most recently Tamsin has finished a portrait of a ballerina, as the Firebird, and a painting of the Paris Opera House which she visited.

Tamsin said, like her, others with PH might find a creative hobby therapeutic. “I would recommend doing something creative like this, as it can be very relaxing and enjoyable. There are many different ways, to suit everyone. It helps me to focus on things other than my health and helps with my emotions. When Natsu became unwell and passed away, it helped me with my sadness of losing her. I drew and started painting our other birds, and made needle-felted versions of them.”

In addition to her passion for art, Tamsin has been interested since school in Japanese culture. Although she hasn’t been able to travel to Japan as the journey is too demanding, she is learning the Japanese language.

She has a collection of beautiful vintage Japanese Kimono and their accessories, which she buys from a specialist shop in Bristol, where she lives. Made from silk and silk-crepe, the garments have usually been dyed and decorated before being hand sewn together.